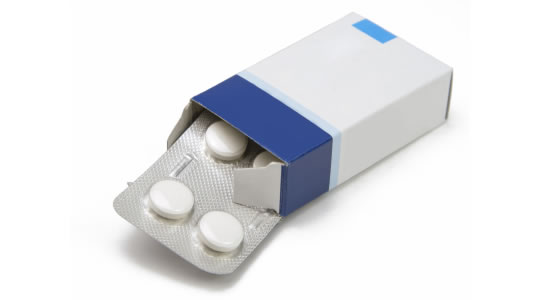 In June 2016, Corporacion Innovarte and the House of Representatives Health Commission, following the proposal of the NGO Innovarte and patient foundation, Nuevo Renacer, requested the Ministry of Health to issue a report on the reasons why the compulsory license mechanism is not used to access medicines at a lower cost.

In November 2016, an informative meeting was held with a group of deputies from different sectors, about the possibilities regarding access to medicines for Cancer and Hepatitis C patients, in the case that compulsory licenses are granted in Chile on pharmaceutical patents. This mechanism has never been used despite being contemplated in Article 51 of the Chilean Industrial Property Law.

On January 11, 2017, Corporacion Innovarte and the House of Representatives, adopted an agreement where the Ministry of Health was asked to use compulsory licenses to improve drug accessibility, and generate protocols for it. The Ministry of Economy was also asked to improve the current regulation. Document available here Acuerdo Cámara Diputados sobre Licencias Obligatorias – 11 de enero de 2017

On January 31, 2017, Corporacion Innovarte and the Ministry of Health answered the circular of Deputy Giorgio Jackson informing that the treatment for Hepatitis C, Harvoni, is acquired at a price of USD $10,000 per treatment. In pharmacies can reach over USD $65,000 purchased particular. Document available here Valor tratamiento Hepatitis C para Ministerio de Salud – 31 enero 2017

On March 17, 2017, Corporación Innovarte and Fundación Nuevo Renacer, together with deputies Alvarado, Jackson, Boric, and Rubilar, presented a letter to the Ministry of Health, requesting it be declared that there are public health reasons for granting a compulsory license on the medicines against Hepatitis C. This treatment costs 10 thousand dollars if the Ministry of Health acquires it through public purchase. That letter also requires that it be declared regarding the medicine for castration-resistant prostatic cancer needed by a patient member of the Nuevo Renacer association that had no way to pay for the treatment (today unfortunately already deceased). 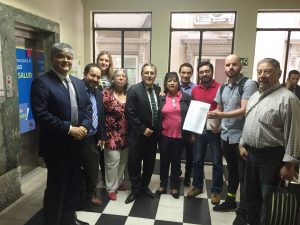 On April 3, 2017, the Innovarte NGO team and patients, accompanied by the president of the Senate’s Economy Commission, Senator Eugenio Tuma, met with the Minister of Economy, Felipe Céspedes, to request the support of the Ministry of Economy for the granting of compulsory licenses for medicines against Hepatitis C and prostate cancer. See news here http://tiempo21araucania.cl/piden-al-gobierno-aplicar-licencias-obligatorias-en-medicamentos-para-tratar-el-cancer/ 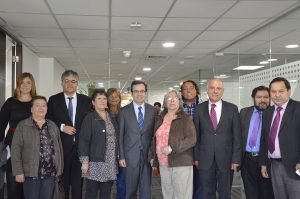 On May 23,2017, a new letter signed by the deputies and patients who signed the first letter of the month of March was sent, also including Deputy Víctor Torres, and Senator Eugenio Tuma, who was at that moment, Chairman of the Economy Commission.

In July 2017, Corporacion Innovarte and the Undersecretary of Health, was consulted within a session of the House Health Commission, promised to have the response to the requests on August 10, 2017, which was not complied.

On November 2, 2017, Corporacion Innovarte and representatives of civil society and cancer patients submitted to the Ministry of Health the adherence of the Pharmaceutical Chemists Association to the petition for the Ministry to declare that it is justified for public health reasons, the adoption of non-voluntary licenses for pharmaceutical patents that restrict access to generic drugs for the treatment of hepatitis C and prostate cancer. Document available here Carta adhesion solicitud licencias obligatorias – 02 de noviembre de 2017 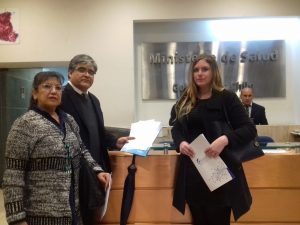 On November 10, 2017, representatives of the NGO Innovarte, Nuevo Renacer Foundation, the College of Pharmaceutical Chemists and cancer and hepatitis patients, supported by the signature of representatives from various sectors, such as Giorgio Jackson, who also accompanied them to the Government Palace, Miguel Ángel Alvarado and Gabriel Boric, attended the La Moneda Palace on November 10th to deliver a letter to the President of the Republic, Michelle Bachelet, presenting the request formulated at the beginning of the year to the Ministry of Health about declaring that there are public health reasons that justify the entry into Chile of the latest generics for the treatment of Hepatitis C and Prostatic Cancer. Document available here Carta Presidenta de la República para disminuir valores de medicamentos para Cáncer y Hepatitis C – 10 de noviembre 2017 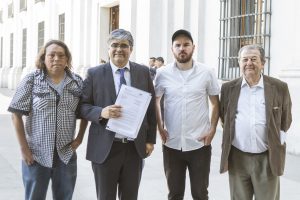 On November 31, 2017, Corporacion Innovarte and Deputies Giorgio Jackson and Miguel Angel Alvarado, accompanying civil society organizations and cancer patients, met with the Minister of Health, Carmen Castillo, to express their frustration over the Ministry of Health and the Ministry of Economy’s delay in responding to the request made by the Chamber of Deputies in January of this year: for the Ministry of Health to use the mechanism of compulsory licenses and thereby allow the entry of generic drugs that make accessible certain medicines restricted by monopolic prices in pharmaceutical patents. The Minister announced that in coordination with the Ministry of Economy this outstanding issue would be resolved before the end of this Government. 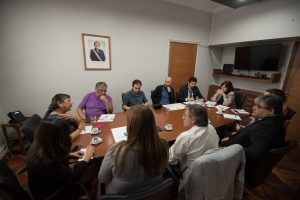 On January 2, 2018, the Chamber of Deputies of Congress approved by majority the decree that there are public health reasons for compulsory licenses for hepatitis C, that resulted in the resolution No. 1014, which urges the President to advance in the application for compulsory licenses for anti-hepatitis C drugs. Document available here Acuerdo Cámara de diputados Nº 1014-

On March 9, 2018, the Ministry of Health replied the request from the NGO Innovarte, issuing a Resolution stating that there are public health reasons that justify the granting of compulsory licenses regarding patents affecting last generation medicines against hepatitis C. The reply letter also indicates that there are no patents on enzutalmide and therefore it is not appropriate to pronounce on that medicine. This resolution, Ordinary A 15 No. 1135 of 09.03.2018, serves as the title to demand the granting of the compulsory license in accordance with article 51 of the Chilean industrial property law. Documents available here Respuesta de carta para fines de Salud pública N°1135 Resolución de otorgameinto de licencias obligatorias 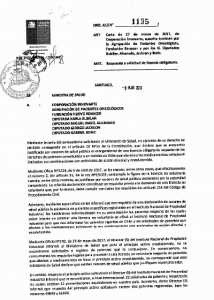